Martin Reef Light is accessible by boat, and is an active Aid to Navigation. The solitary light sits out in the lake about 7 miles south of the Les Cheneaux Islands archipelago, marking the East Entrance to the Les Cheneaux Islands and Port Dolomite, a deepwater shipping port from which quarried limestone is loaded onto massive Great Lakes freighters. The historic Martin Reef light station was built in 1927 to replace the lightship LV89 – Martin, which served to mark Martin Reef from 1909 to 1927.

The 70-foot Martin Reef Light is an architectural duplicate of the Poe Reef Light, which was built by the same construction crew in the Straits of Mackinac in 1929. Eventually, sailors grew confused by the twin lighthouses, so Poe Reef light was painted with black and white horizontal stripes to differentiate it from the Martin Reef Light.

During the construction of Martin Reef Light, a base camp was set-up on Government Island in the same area of the Les Cheneaux Islands used by the builders of the Spectacle Reef Lighthouse, which was completed in 1874. The camp consisted of numerous small buildings, along with cook and bunk houses. The foundation crib and stone blocks were constructed and prepared at this location and then taken by steamers to the construction site. Following the completion of Martin Reef Light, the camp was dismantled and moved to the Cheboygan River for the subsequent construction of the Poe light. Submerged dock timbers and a cement block on the northeast tip of the island are all that remain of the Government Island camp. 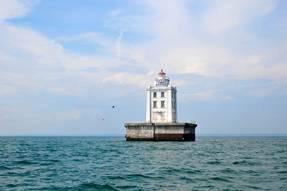 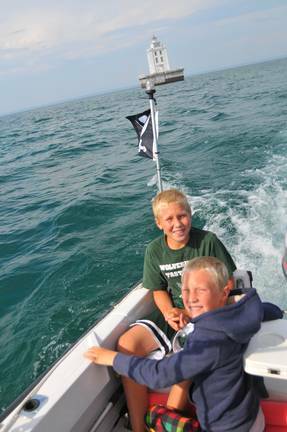 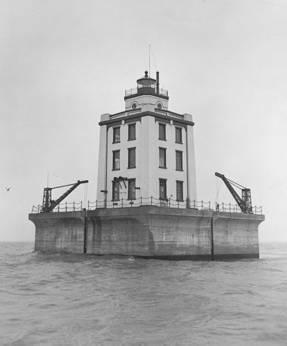